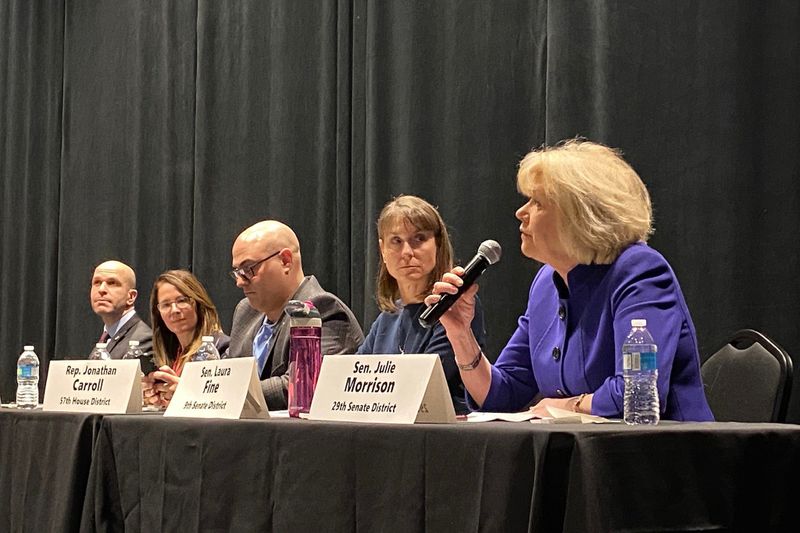 Northbrook-area state legislators came together for a town hall Tuesday night, taking questions from constituents on such topics as care for people with disabilities, taxes and green energy initiatives.

About 70 people gathered in the auditorium of the Northbrook Public Library to listen to state senators Julie Morrison, D-Deerfield, and Laura Fine, D-Glenview, and state representatives — all of whom are up for reelection in March — Bob Morgan, D-Deerfield, Jonathon Carroll, D-Northbrook, and Jennifer Gong-Gershowitz, D-Glenview.

Audience members were asked to write questions on comment cards, which were read to the legislators by library Director Kate Hall.

Of particular interest from the crowd was care for people with disabilities, including those suffering from dementia and Alzheimer’s disease, as well as people with autism spectrum disorders who are non-verbal, and individuals with intellectual and developmental disabilities.
Fine said she will be introducing a bill at the Jan. 28 start of the new legislative session in Springfield that will address training for first responders and health professionals to recognize the symptoms of dementia “so we have more positive outcomes.”Fine also said she expects to introduce a bill that would have private insurance cover visits with specialists outside the office for children with developmental disabilities, so they can receive services in their school or home.

Gong-Gershowitz said she believes legislators “reflect their values” by the way they fund resources in state’s budget, a theme she echoed throughout the evening.

“The budget is a document that reflects the priorities in the state,” Gong-Gershowitz said. “And when we cut funding for things like Alzheimer services and Department [on] Aging, that leaves people with fewer resources and options for their families.” Morrison said she thinks institutionalization is sometimes a misuse of resources, and would like to see more integration for people with developmental disabilities, prompting
applause and shouts of “hear, hear” from the audience.

She said employers need to do a better job of hiring candidates of this population, which can be helped by removing some “archaic testing methods,” which can be barriers to employment.

“We need to do everything we can to encourage that those families help those young people and older people transition into the community, so they’re not isolated, so they grow up and so they live and function in the communities they were born in,” Morrison said.

In the audience was Kathy Fielding, the vice president for membership engagement at the North Suburban YMCA in Northbrook, who said she was interested in the town hall because her organization serves “people with special needs.”

Fielding said it was important for her to know what is going on in the state legislature to help make sure “that the needs of our community are met.”

The legislators also took questions about the referendum question that will be on the November ballot asking if the state Constitution should be amended to allow lawmakers to pass legislation calling for a graduated income tax, rather than continue with a flat tax.

Moving to a graduated income tax would follow the federal income tax, which is also graduated, Gong-Gershowitz said.“The ‘fair tax’ says it will only increase taxes to the upper 1% (of income earners),” a question from the audience read. “What happens when the top 1% move residences to out of state? This is really not a sustainable idea.”

Fine said lawmakers did “many studies” before putting the referendum on the ballot, and said they found that in states with a graduated income tax, “upper income earners did not leave the state.”

“What we have found in Illinois is people have left the state, but studies show that the people who have left the state are earners under $50,000,”
said Fine, who was elected state senator in 2018 after switching from her post as a state representative.

Several others questions were about property tax relief, which Gong-Gershowitz and Carroll said is mainly the of local government. Gong-Gershowitz urged audience members to pay attention to municipal elections and budgetary decision-making.However, Carroll pointed out that a state task force is working on recommendations for a property tax relief bill. He is on a sub-committee of the task force and said they are working on legislation “that’s going to take small bites to be able to get to the core,” as there’s no one way to address the issue. As legislators addressed what they are doing to improve the finances of the state, including passing a bill in 2019 that consolidated fire and police pensions, a woman sitting in the back interrupted the town hall to yell at the lawmakers. She was asked to either be quiet and write questions on a comment card or leave, so she exited the library, followed by a Northbrook police officer.

Some residents asked about bills that address environmental sustainability and climate change, and Fine explained that she believes the Clean Energy Jobs Act will pass this session.

She said that bill would “transition to the clean energy economy.” Solar energy is “just booming” in Illinois, so this is the next step, Fine said.

The Clean Energy Jobs Act will create new jobs in renewable energy, eliminate carbon emissions from electricity plants by 2030, and invest in the “electrification” of vehicles and public transportation, she said.

Fine and Carroll addressed the federal government’s expected restrictions on the state’s ability to transition to clean energy.

“We need to push back on them before these regulations go in place,” Gong-Gershowitz said. “Time is of the essence. We really can’t afford not to get this done this session.”