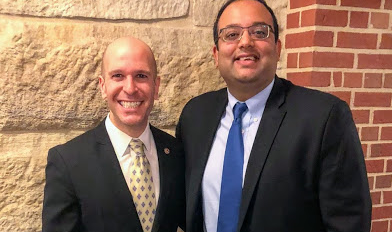 SPRINGFIELD, IL – Today, State Senator Ram Villivalam (D-Chicago) and State Representative Bob Morgan (D-Deerfield) join legislators from around the country in unveiling a national bipartisan campaign to phase out corporate giveaways by establishing an interstate compact. This bold proposal seeks to liberate states from participating in tax-payer funded subsidy battles by having states join together and refuse to provide companies with tax breaks or other incentives, as in the case of the Amazon HQ2 bidding war.

As of January 28, the legislation is filed in New York, Hawaii, Florida, Maryland, Illinois, Iowa, West Virginia and New Hampshire.

The legislation would bring each state into a formal agreement with other states to phase out corporate giveaways through two main provisions. First, member states agree to end the practice of offering tax breaks to a facility located in another member state as an inducement for the company to move. Second, member states participate in a national board of appointees to discuss and propose enhancements to the existing agreement for future consideration by each state.

“Corporate giveaways are one of the least effective uses of taxpayer dollars for job creation because companies too frequently take tax incentives to choose locations that they would have chosen anyway,” said Senator Ram Villivalam. “So instead of creating additional jobs, they simply deplete a community’s tax base instead, which often affects communities who can least afford it.”

“While our state budget is already starved by excess tax breaks, we want to build support over time and appeal to our colleagues who don’t wish to unilaterally disarm in the giveaway game.” said Representative Bob Morgan of Illinois. “This is a reasonable go-slow approach, and can help us refocus our state budget on priorities such as education and human services funding.”

Please see EndTaxGiveaways.org for links to the legislation in other states as well as the names of legislators who are supporting the effort.