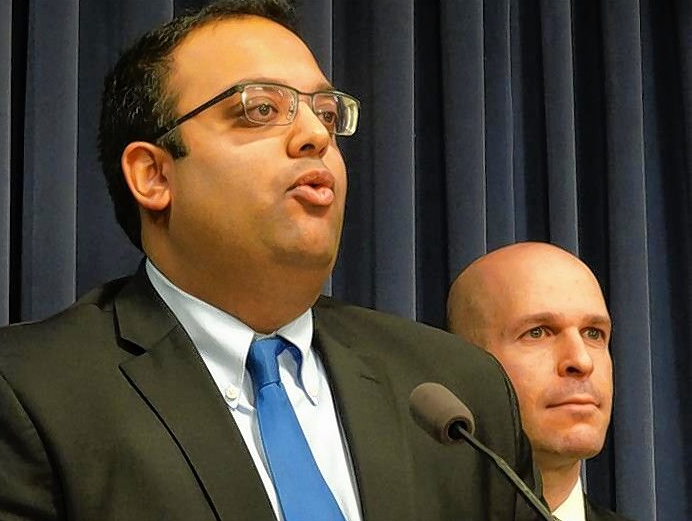 SPRINGFIELD — Two Democratic lawmakers unveiled legislation Tuesday to form a multi-state compact in which each member state would vow not to use company-specific tax incentives to lure businesses away from another member state.

“These kinds of tax breaks have historically been justified as a necessary evil,” Morgan said during a Statehouse news conference Tuesday. “A necessary expense to bring jobs and business to our state, but in many ways to keep jobs from leaving the state of Illinois as they hold us hostage, because other states are offering them tax incentives.”

The proposal is part of a nationwide effort to phase out all tax incentive programs aimed at luring businesses to move across state lines, or to prevent them from moving. Similar legislation has already been introduced this year in New York, Florida, New Hampshire, Hawaii, West Virginia, Iowa and Maryland.

Dan Johnson, a lobbyist for the Coalition to Phase Out Corporate Tax Giveaways, said that so far, Missouri and Kansas are the only states that have formalized such an agreement. However, that deal to end what many people in the region were calling a modern-day “border war” was limited to six counties that make up the Kansas City metropolitan area, which straddles both sides of the state line. The deal does not apply statewide in either state.

Villivalam said economic development tax incentives create an uneven playing field because some businesses get them while others don’t.

“Corporate giveaways have grown this business inequality that we see and generate a race to the bottom,” he said. “This is because companies have too frequently been given tax credits tax incentives to choose a location that they would have chosen anyway. So instead of creating additional jobs, they deplete the community’s tax base.”

Senate Bill 2502 and House Bill 4138 would enter Illinois into the Phase Out Corporate Giveaways Interstate Compact. That would involve an agreement not to use tax incentives or grants to lure a specific company away from any other compact member for the purposes of relocating a corporate headquarters, manufacturing facility, office space or other retail development.

The bills also call for establishing a national board that would make recommendations about how to phase out other kinds of corporate incentives.

Although the initiative is being sponsored by two Democrats, it also has the backing of the conservative group Americans for Prosperity, which was founded in 2004 by the billionaire brothers Charles and David Koch.

“We don’t like government picking winners and losers in the economy. Usually when they do, they usually pick wrong,” said Brian Costin, deputy state director for AFP’s Illinois chapter.

The House bill was assigned Tuesday to the Revenue and Finance Committee. The Senate bill was not yet assigned to a substantive committee Tuesday.