Bringing people together was one of the focuses during former Deerfield Mayor Harriet Rosenthal’s 44 years in public service.

Thanks to a new garden dedicated in her honor in front of Village Hall, the community will have a new place to gather and come together.

Harriett’s Garden, which features a perennial flower bed and a flagstone path leading to a bench, was dedicated Sept. 18 in a ceremony that celebrated her contributions to the community.

A crowd of more than 175 people including family, friends, public officials and other community members gathered to hear Rosenthal’s accomplishments recollected and talk to each other in a communal setting.

“It was so beyond my expectations,” Rosenthal said. “It was truly a garden party with the flowers and the white chairs. I thought people would just be standing around. I told them to bring chairs.”

“It was like an out of body experience,” Rosenthal said. “I wasn’t sure who they were talking about.” 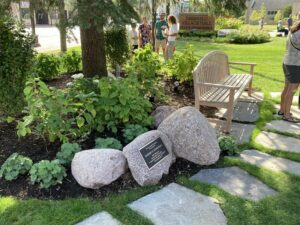 Oppenheim, a landscape designer by profession, designed and oversaw the development of the garden. She said the perennial portion was planned to have blooming flowers from early spring into autumn. A flagstone path leads from the flower bed to a bench in front of more plantings.

Oppenheim said she wanted it to be a place which fit Rosenthal’s contributions to the community. They have known each other more than 25 years serving together much of that time.

“This is a place where people can reflect on the community and where they can also come together,” Oppenheim said. “It’s a place to bring people together. It’s a good way to celebrate what Harriet (Rosenthal) has done.”

Shapiro said the perpetuity of the garden is a fitting tribute to Rosenthal’s tenure in village government. She was mayor for 12 years and spent 24 years on the Village Board of Trustees. She was also on the Plan Commission for eight years before that.

“Deerfield is better because of her endless spirit,” Shapiro said.

Raising her daughters in Deerfield, and then having the opportunity to watch her five grandchildren

graduate from Deerfield High School, Rosenthal said families are what makes her experiences in the village special.

Schneider and his wife moved to Deerfield 31 years ago and raised their children in the village. He said Rosenthal was a mentor to him before he was first elected in 2012.

“Her ideas brought a big vibrancy to the village which will continue for a long time,” Schneider said. “She has made it an inclusive place where all are welcome where we came to raise our two children.” 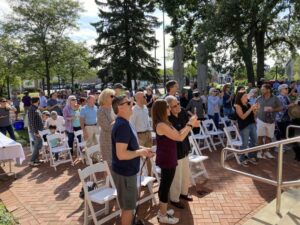 Morrison, who worked closely with Rosenthal when she was West Deerfield Township supervisor before being elected to the state Senate in 2012, said they worked together to help the community.

“She always did it with grace and style,” Morrison said. “When we talked together about making something good, she would talk about ways to make it better.”

Morgan said he feels Rosenthal’s influence in Springfield when he hears colleagues talking about issues like affordable housing and gun safety, citing what Deerfield is doing as an example. Sometimes she takes the more difficult path when she believes it is best

“There are a lot of different opinions about gun safety in Illinois,” Morgan said. “She was a leader by making the community safe for our children and all people. When she made decisions about the (coronavirus) pandemic, she treated every family like they were her family.”