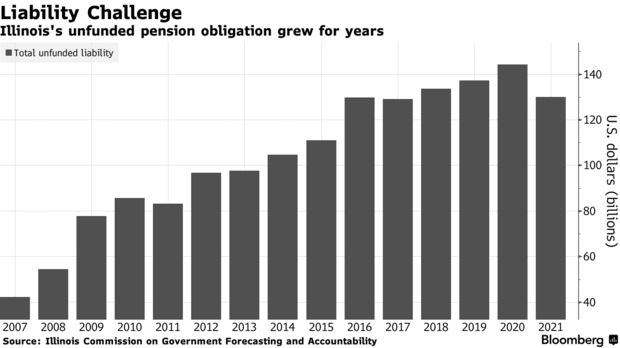 Illinois lawmakers are considering a bipartisan proposal to authorize selling $1 billion of debt to pay for pension buyouts, in a bid to reduce the worst-rated state’s massive unfunded liability for its retirement systems.

A bill introduced in December by state Representative Bob Morgan, a Democrat, would approve borrowing to extend a buyout option for many employees of the state, its universities and school systems. The debt would be on top of a previous authorization from 2018 to issue $1 billion of so-called pension-obligation acceleration debt, most of which has been sold.

The pension-buyout program has already cut Illinois’s liability by $1.4 billion, but that still leaves an unfunded obligation of about $130 billion, state data show.

“It chips away at a much larger problem,” Eric Kim, an analyst for Fitch Ratings, said in an interview. “But you are paying for it with debt.”

A key distinction of the Illinois program is that it reduces liabilities, instead of replacing them with a bond obligation, as traditional municipal pension debt typically does, Kim said. Illinois has sold traditional pension securities, including $10 billion in 2003.

The proposal comes amid the biggest wave of municipal pension-obligation bond issuance in decades, and at a time when interest rates are still well below historical averages. States and localities sold around $13 billion of traditional pension-obligation debt in 2021. That was the most since 2003, when they issued $17.5 billion, including the Illinois sale, data compiled by Bloomberg show.

Illinois’s unfunded pension liability, which ballooned for years largely due to insufficient state contributions, is a key drag on its credit ratings even after it got the first upgrades in two decades last year. Its finances are benefiting from an improving economy that’s boosting revenue and billions in federal aid, but the state still has to solve its pension conundrum.

Moody’s Investors Service upgraded the state to Baa2 from Baa3 last year, bringing it to two steps above junk. S&P Global Ratings lifted it to BBB from BBB-, while Fitch Ratings raised its outlook to positive from negative, but kept it at BBB-. Even amid the improving fiscal prospects, the firms cited pensions as a challenge.

The drag is apparent in the bond market, where Illinois 10-year debt trades at yields almost a full percentage point above benchmark munis, more than double the spread of New Jersey, which has grappled with its own pension-funding issues.

Illinois Representative Mark Batinick, a Republican co-sponsor of the legislation, said the early payout option for retirees allows the state to cut costs, and bonds let it transform variable costs associated with the unfunded liability into fixed expenses.

The buyout offers retirees accelerated payments in lieu of pension benefits or in exchange for reduced cost-of-living increases. The program was set to end in June 2021 but the General Assembly extended it through June 2024 following the recommendation of Governor J.B. Pritzker, a Democrat who’s up for re-election this year.

The new legislation would add bonds and extend the program through June 2026.

The governor “is supportive of additional general-obligation bond authorization to provide additional funding for the buyout program,” Jordan Abudayyeh, a spokeswoman, said via email.

The state may issue the remaining $115.4 million from the original authorization in fiscal 2023, which begins July 1, according to the governor’s proposed budget. Next fiscal year, the state pension systems will need $312 million in additional pension-acceleration bond proceeds to meet retiree participation in the program, according to the budget.

Representative Morgan says he’s pushing for a full House vote within the next few weeks. The legislation passed unanimously in the chamber’s personnel and pensions committee last month.

The proposal needs actuarial analysis and fuller vetting through greater public deliberation, said Laurence Msall, president of the Civic Federation, a government watchdog. The program also may not be as beneficial as broader structural reform or the addition of money on top of the statutory contribution that Pritzker has proposed in his latest budget, Msall said.

“We have not seen any actuarial analysis for the cost of the borrowing compared to the savings and what’s necessary to achieve that,” Msall said in an interview.